1. The ‘navaŋgasaṭthusāsanaṃ’ – The nine categories of the teacher’s teaching.
1.1 ‘sutta’ – teachings preserved in a pure prose form, the commentary describes them such as ubhatovibhaŋga – the ‘pāṭimoḳkha’ or the fundamental precepts from both sides (in this context presumably it is comprehended as that of both biḳkhu and biḳkhuni), khaṇthaka (miscellaneous), parivāra (epitome of the vinaya – or the accessory), nidesa (exposition), and several discourses in sutta-nipāta (one of the oldest collections of Buddhist discourses in the Pāli canon), as well as those other discourses that appear without ‘sutta’ word.
1.2 ‘geyya’ – the collection of teachings preserved in both prose and verse form. Likewise they are meant to be all discourses preserved in verse especially the last discourse in sagathavag̣ga – saŋyuṭtanikāya.
1.3 ‘veỵyākaraṇa’ – the collection of teachings that were commented in details by the commentaries mainly in prose such as ‘abhidhammapiṭaka’, some discourses without verse, and likewise other collection of teachings which were not fit in particular category.
1.4 ‘gāthā’ – the collection of teachings in pure verse form such as ‘dhammapadagāthā’, ‘theragāthā’, ‘therīgāthā’, and those pure verse in sutta-nipāta that appear without ‘sutta’ word.
1.5 ‘udāna’ – the collection of teachings which come in the form of utterance or expression of the Buddha and that of other foremost ordained disciples, mainly they were preserved in pure verse form.
1.6 ‘itivuṭtaka’ – the collection of teachings appeared as references presumably to the possible authentic words of the Buddha in a form of short passages such as the 110 discourses that begin with expression of ‘vuṭtaṃ hetaṃ bagavatā’ (this has been said by the blessed-one…).
1.7 ‘jātaka’ – the collection of teachings in mythical tales and legend – apparently those stories referred to past lives of the Buddha while accumulating perfection and sublime merit in ‘bhoṭhisaṭtā’ (sentient being who await to become Buddha) form before the achievement of enlightenment in this life.
1.8 ‘aḅbhutadhamma’ – the collection of teachings of supernatural power and magic of the Buddha and his foremost ordained disciples, for example the account of Buddha dwells inside his mother’s womb in which he is described sitting in a meditative posture, turning his face to the front, apparently depicted not tainted by blood and other kinds of liquid inside his mother’s womb est.
1.9 ‘vedaḷla’ – the collection of teachings in the form of question and answer- It literally means ‘gaining knowledge and joy’. In this context, it is explained that the Buddha’s audience continues endlessly questioning him, for it never stop entailing their joy and pleasure.
Therefore, the organisations of the teachings of Buddha of ‘nine categories’ seemed to exist by the time he was still alive before the emergence of tipṭaka later. Evidently it possibly is the most archaic form of collection of teachings in the history of Buddhism.
2. Another system is organised in another conventional form called ‘vag̣ga’ (chapter, volume) apart from ‘navaŋgasaṭthusāsanaṃ’ as mentioned previously. It is claimed that there is a tendency to assert that the teachings were collected in ‘vagga’ form – only the exact numbers was unclear. Evidently, the one and only, there is an account in ‘vinayapiṭaka’ described a story of soṇakuṭikaṇṇa biḳkhu, who is an acquaintance of venerable mahākaccāyana biḳkhu – one of the foremost ordained disciples of the Buddha, was once sent to the presence of the Buddha by his inceptor. His significant mission was to ask the Buddha for rescinding some of the miscellaneous monastic disciplines. The account was described that soṇakuṭikaṇna biḳkhu resided in the presence of the Buddha and gradually lauded his dignity in a chanting form called ‘aṭthakavag̣ga’ – the eight chapters collection. 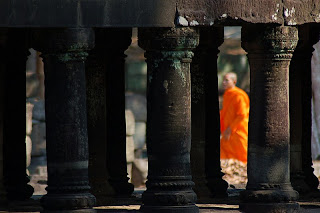 3. The collection of teachings in a group or division – begins from ‘group 1 – group 10’. Evidently at one time the Buddha, after addressing monks, observed that most of his disciples still have the will to continue the dhamma talk with him. He then assigned one of his foremost ordained disciples – sāriputta to continue the discussion with those monks. In an account, it is asserted that sāriputta, rather concerning Buddhist issue, brought about the cause of the philosophical division of the nigantha (ascetics of Jainism – the founder is nigantha nāṭputra or mahāvira) shortly after the death of their master. Sāriputra pointed out [exemplified] that the major cause of theoretical and philosophical division inside Jainism school is because of mahāvira never thought of assembling his teachings into proper collection or system. He then urged, probably strongly suggested, those acquaint monks to considerate collecting and assembling the Buddha’s teaching into a systematic collection for the first time called ‘saŋgīti’ (assembly, collect). Those teachings then were organised in 10 groups which appear in ‘saŋgītiyasutta’ of ‘suttantapiṭaka’ discourse, volume 11.
Posted by Dr.Jay at 3:52 AM