Places and monasteries of the Buddha

According to evidences appeared in Marothapūranī scripture, it states monasteries and places the Buddha dwelt in in his 45 years of long journey for his doctrine propagation: 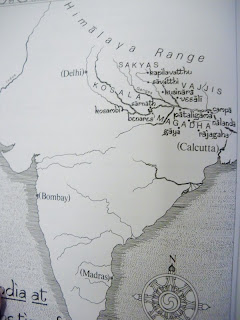 Only in the last year of his life the Buddha, unexpectedly, decided to take a long journey again at the age of 80 aiming towards the city of Pāvā and Kusinārā. The full account appears in Mahāparibānasutta [Mahāparivarn᷂asutra]. It is believed that the aging, unhealthy, and stricken Buddha wanted to spend the last year of his life and wished to visit another kingdom of his relatives which are Pāvā and Kusinārā. Eventually he died here ending a long journey of 45 years which immensely brings wisdom, virtuous teachings and wonders to the world.
Posted by Dr.Jay at 4:02 AM

Email ThisBlogThis!Share to TwitterShare to FacebookShare to Pinterest
Labels: The Buddha